Einstein, the albino American Crow, has resided at the wildlife center for nearly two decades. He can say hello and “wow wowwow!”. His charismatic personality helps people to see how intelligent and social crows are. He has some metabolic issues associated with his albinism. He is the greeter in our clinic. 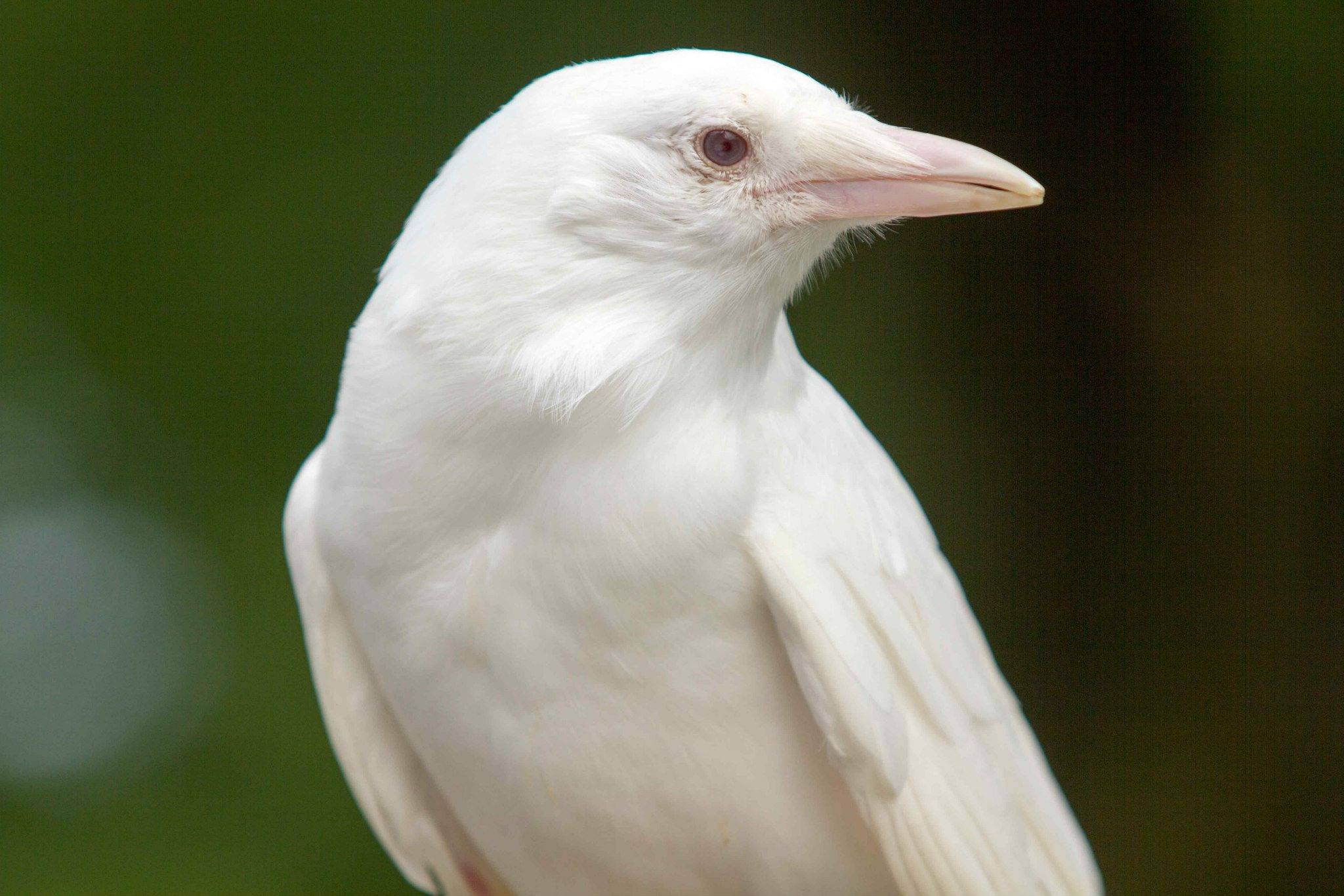 Atticus is a Short-eared Owl.  An endangered species in PA, Atticus is a very special ambassador. He has a wing injury that could not be repaired well enough to allow him to sustain flight.  These owls live not in woodlands but in tall grassland habitats, declining habitat in PA. 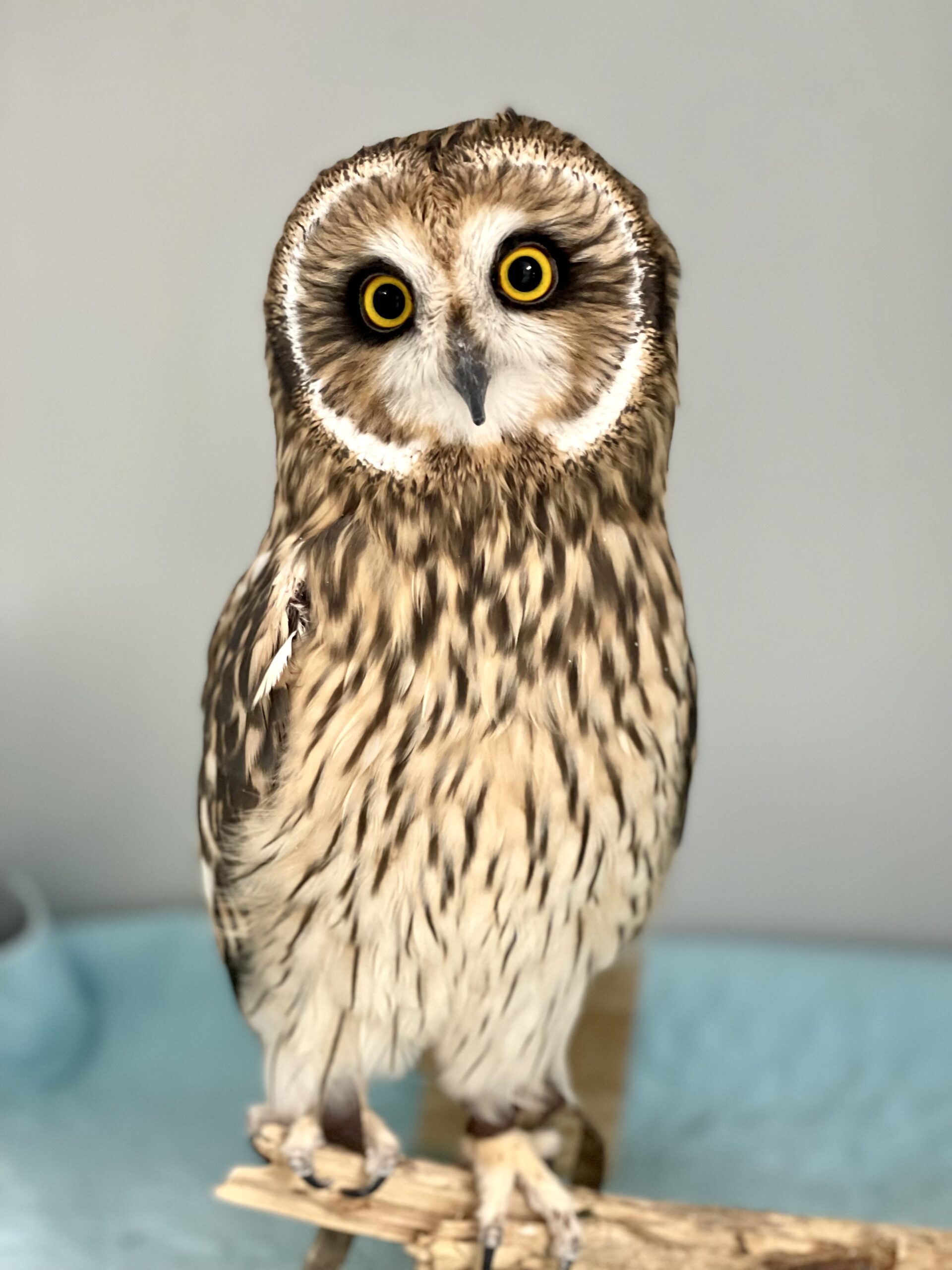 Montana is an Eastern Coyote.  Raised in a human household, he is irreversibly habituated and enjoys having behind his ears rubbed and an occasional belly rub.  Eastern Coyotes are larger than their western counterparts due to having the addition of wolf DNA.  He enjoys a good howling conversation if you engage, and he eats just about any kind of meat he is provided. 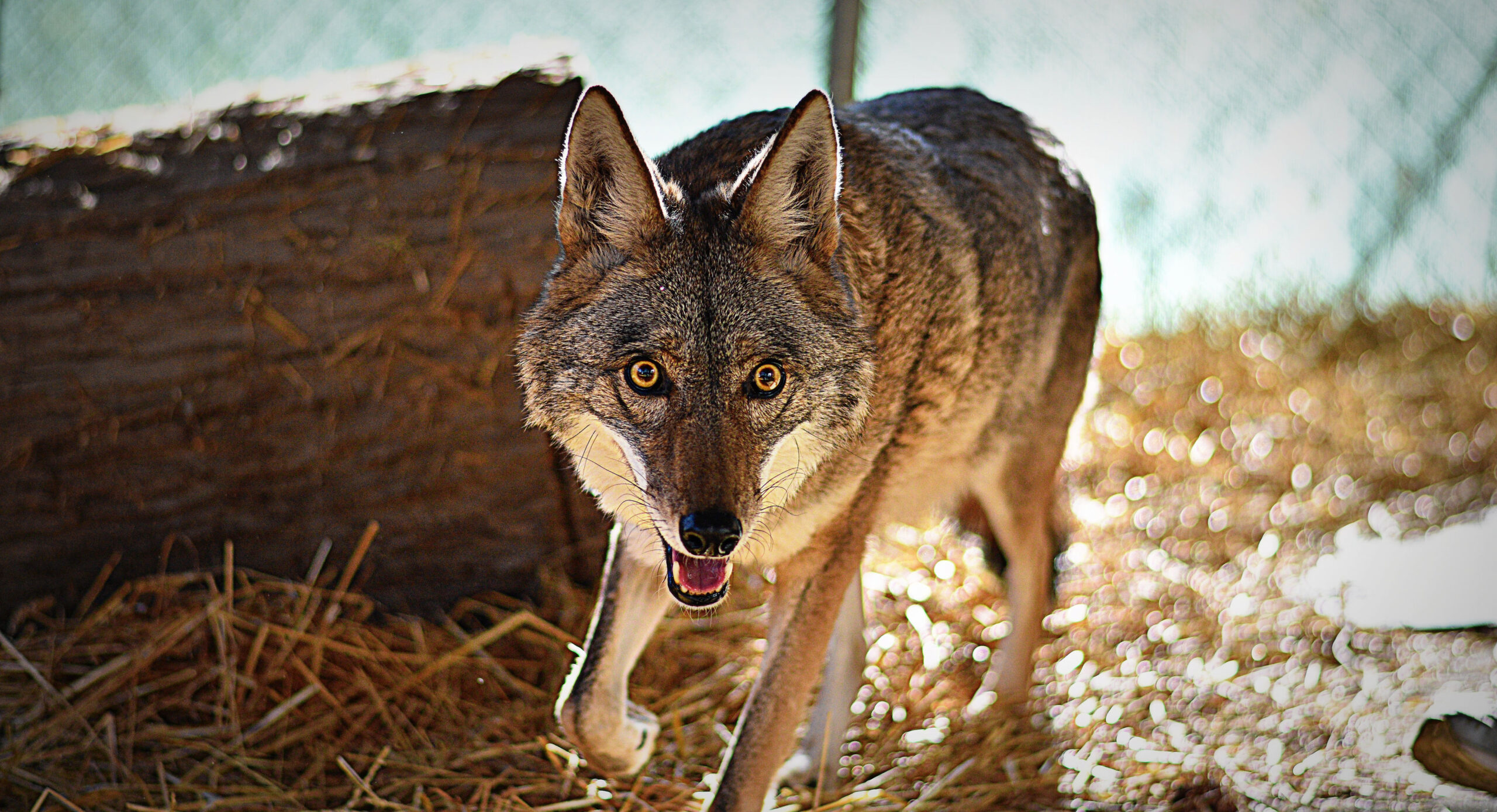 Jack and Kira are American Kestrel Falcons.  Kestrels are sometimes called “the farmers’ friend” because they prey on many crop pests, including mice, grasshoppers and seed-eating birds.  Unlike most raptors, the males and females show different colors. Jack has blue-gray wings and a peachy colored breast, while Kira has reddish wings and a heavily-streaked breast.  For a dove-sized bird they are fierce! 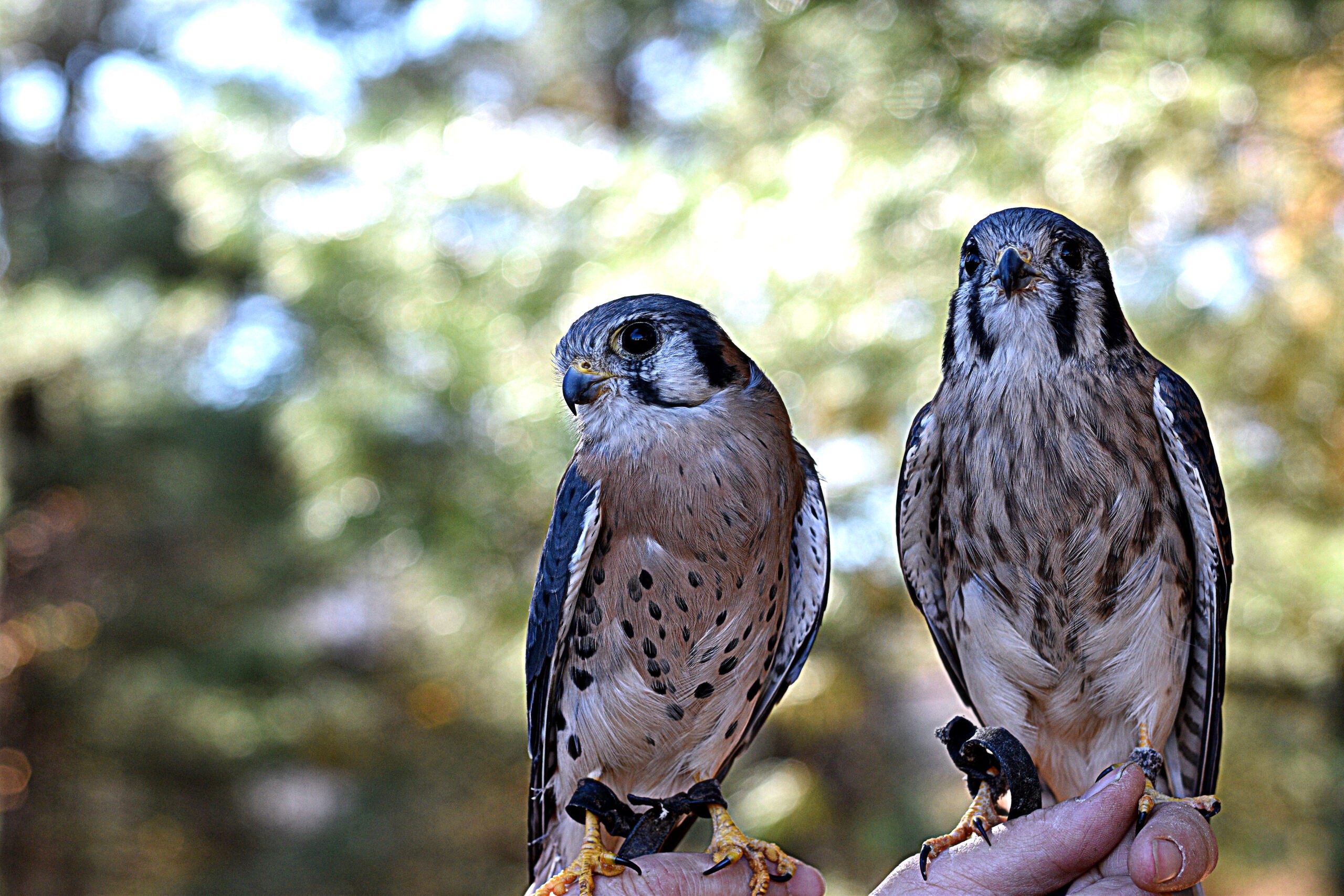 Owliver, the Barred Owl, was found as a hatchling on the ground in the forest and was raised for his first month around people. Imprinted on humans, he was transferred to our wildlife center as an education ambassador. Barred owls live in swamps, and near rivers and streams.  Their call sounds like “Who cooks for you, who cooks for you allll??”. Although Barred owls appear large, they weigh less than 3 pounds. 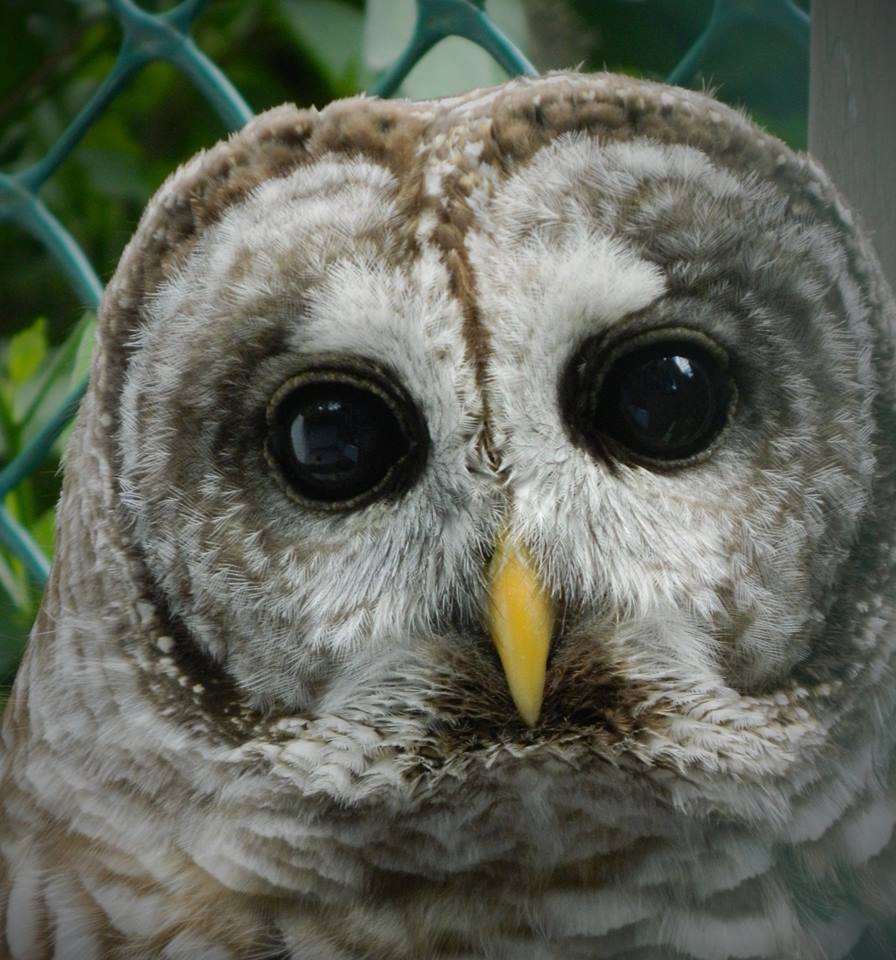 Rusty, the Red-shouldered Hawk, suffered a terrible wing injury when struck by a vehicle.  The very end of the wing (the “hand”) had to be amputated, but with some ramps, he gets plenty of exercise in his flight enclosure.  Smaller cousins of the Red-tailed hawk they are quite vocal, and Rusty is no exception! 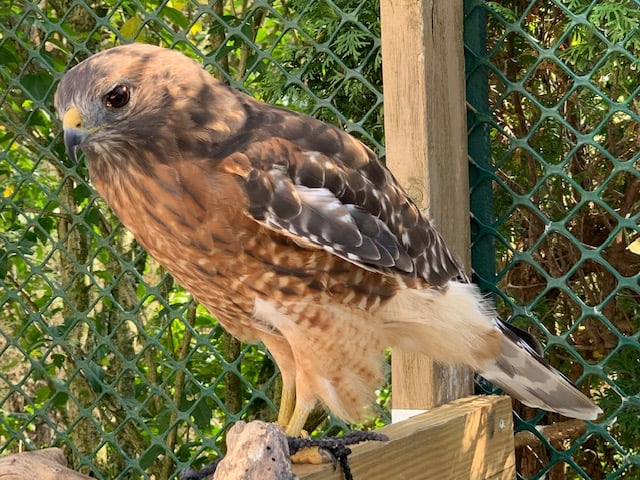 RT, the Red-tailed Hawk has been with us for two decades.  He was the first raptor we treated that survived West Nile Virus which left him with some neurologic deficits.  He is a handsome older gentleman who can still look pretty fierce when he wants to. 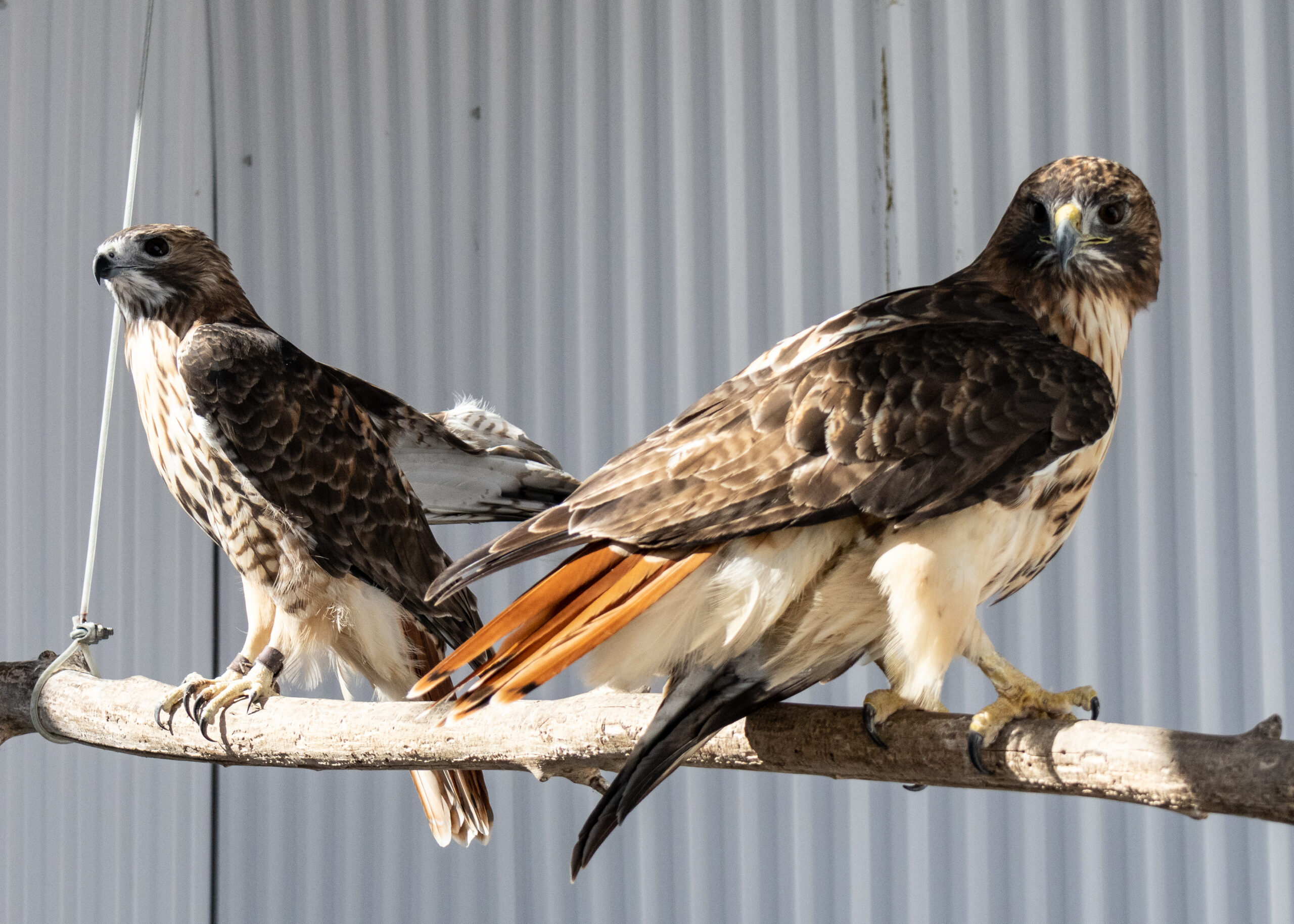 Leo,  the Long-eared Owl appears to look like a mix between Screech and Great-horned owls.  With eyes so wide he always looks surprised; he is learning to trust people and we hope to share him with the public soon. Leo lost the tip of his wing (the hand joint) from being struck by a vehicle and cannot fly. 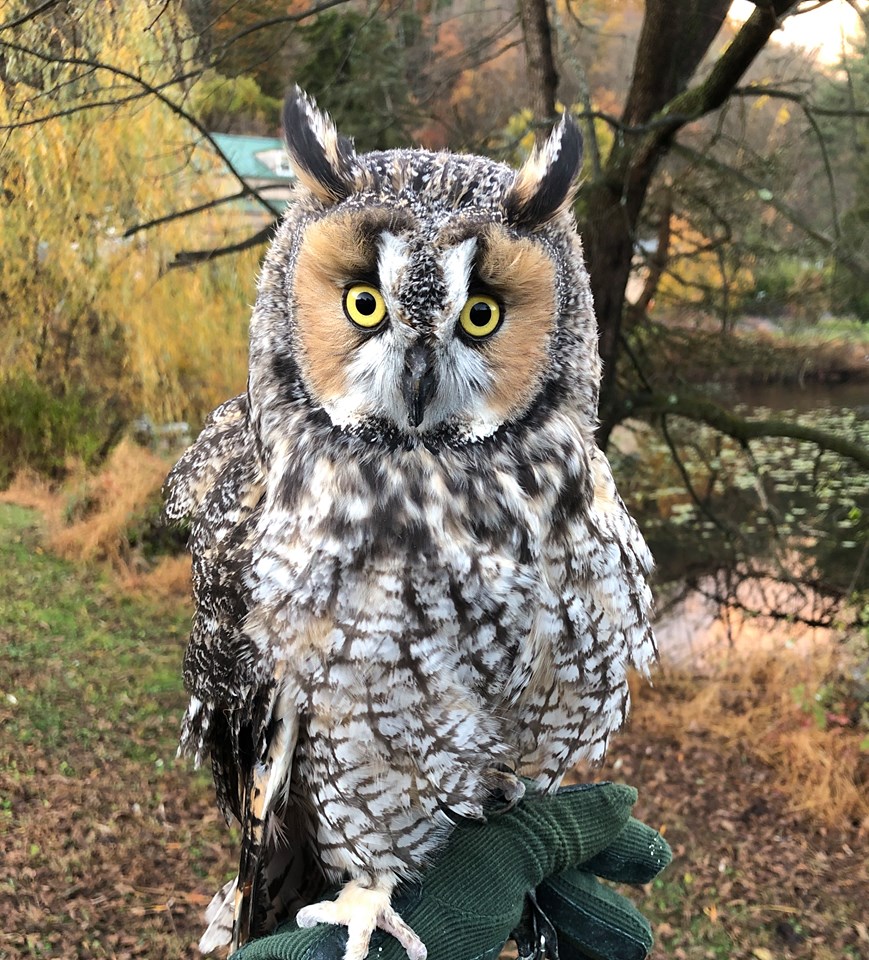 Minimus, the Saw Whet Owl, came to the Center when he was only a few months old. Newly fledged, he flew into the path of a vehicle and fractured his wing.  The wing was repaired and Minimus can fly, but not well enough to catch prey.  The smallest owl in the East, Minimus weighs mere ounces and stands less than 6 inches tall.  He is captivating and his presence helps people learn about the adaptations and diversity of owls in PA. 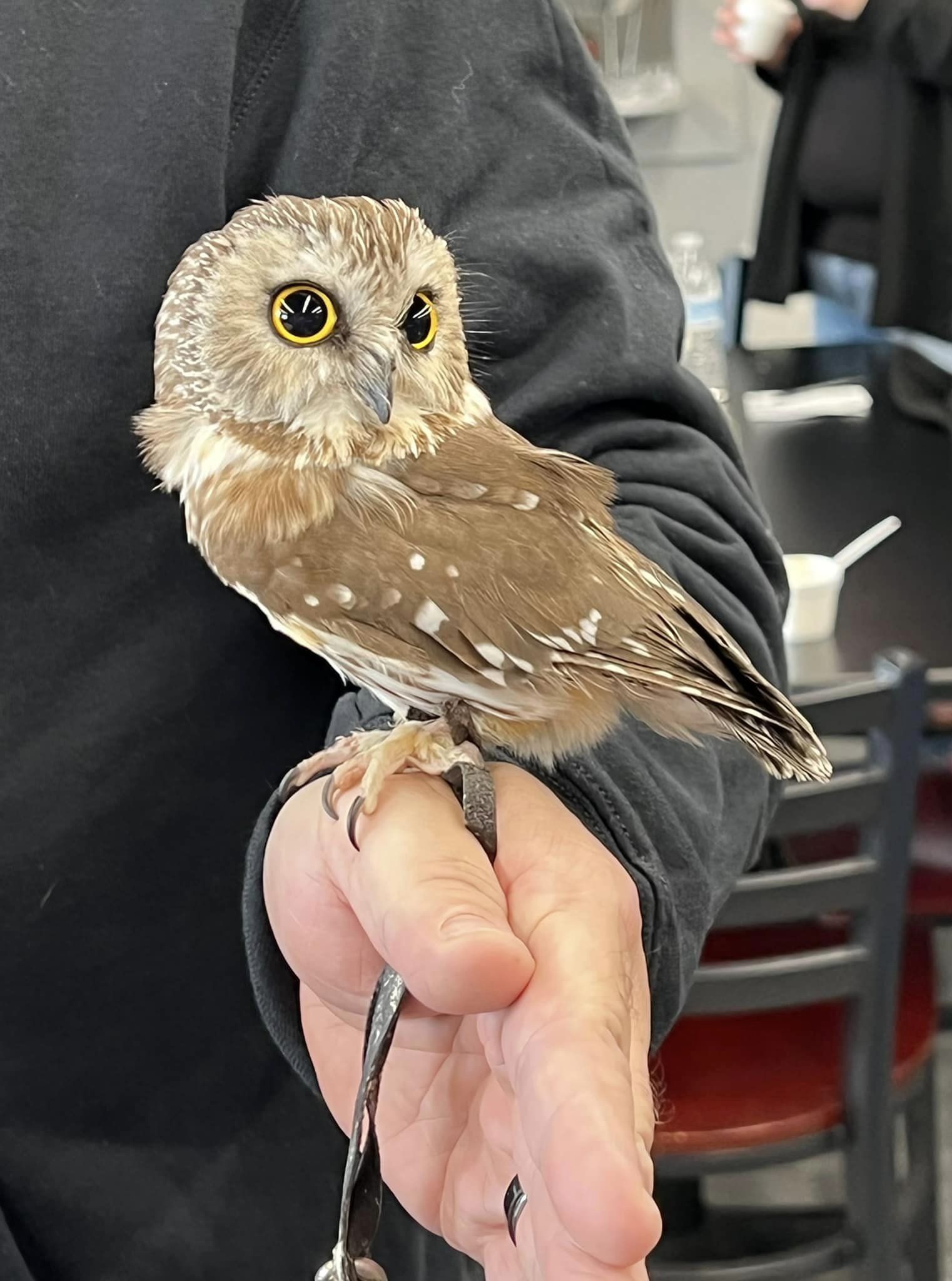 Poppy the Porcupine shares with people her captivating personality and amazing adaptations that porcupines possess.  30,000 quills cover most of her body, save her belly, strong claws for climbing and hard, orange iron-coated teeth that continue to grow while worn down by eating the bark of trees.  Her favorite snack is Triscuits. Porcupines love salt! 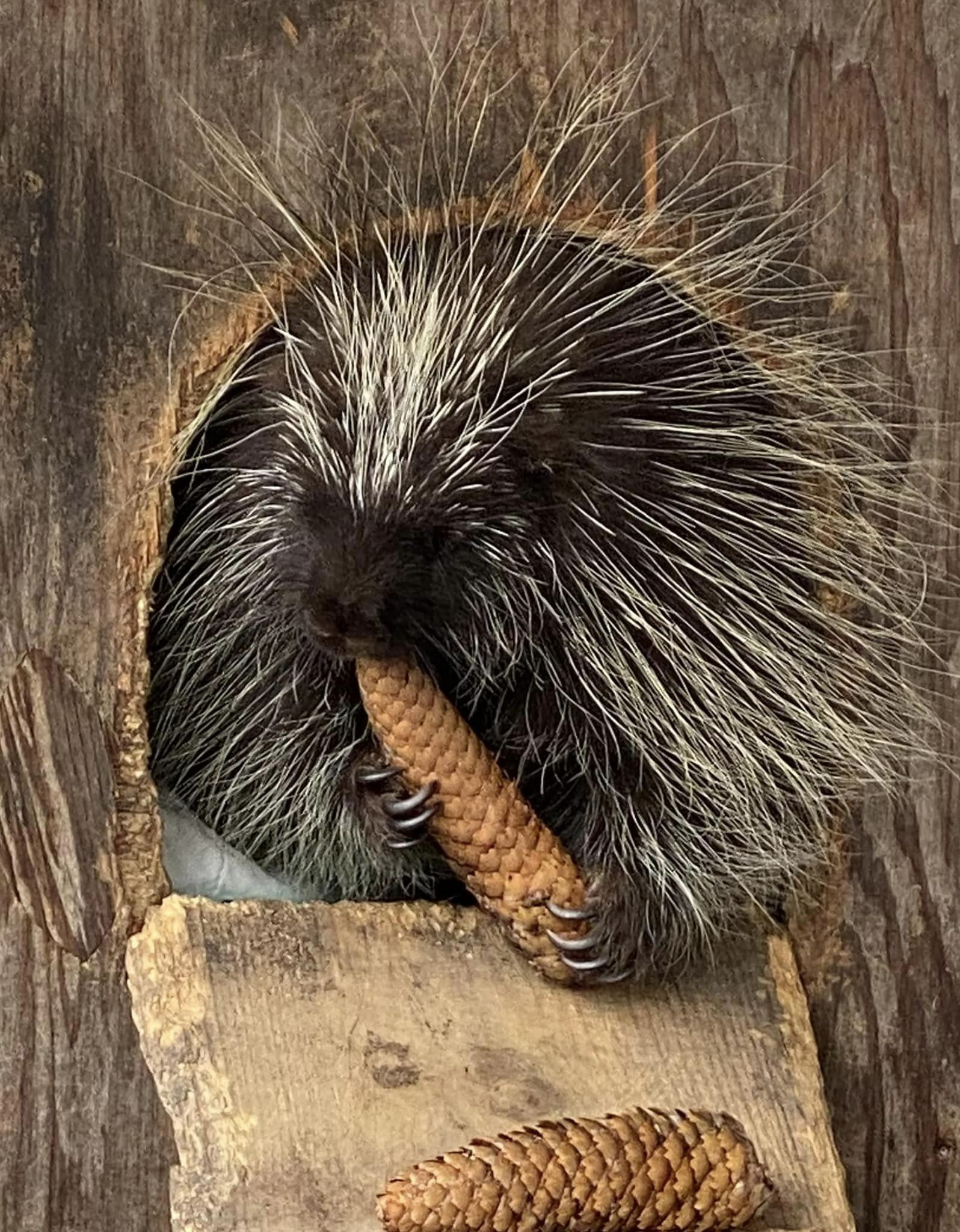 Callie, the Striped Skunk, was acquired from a breeder and has been de-scented.  Callie shows people how interesting skunks can be and that despite their very strong-smelling defense, skunks are wonderful at reducing the populations of destructive insects and devour nests of yellow jackets! 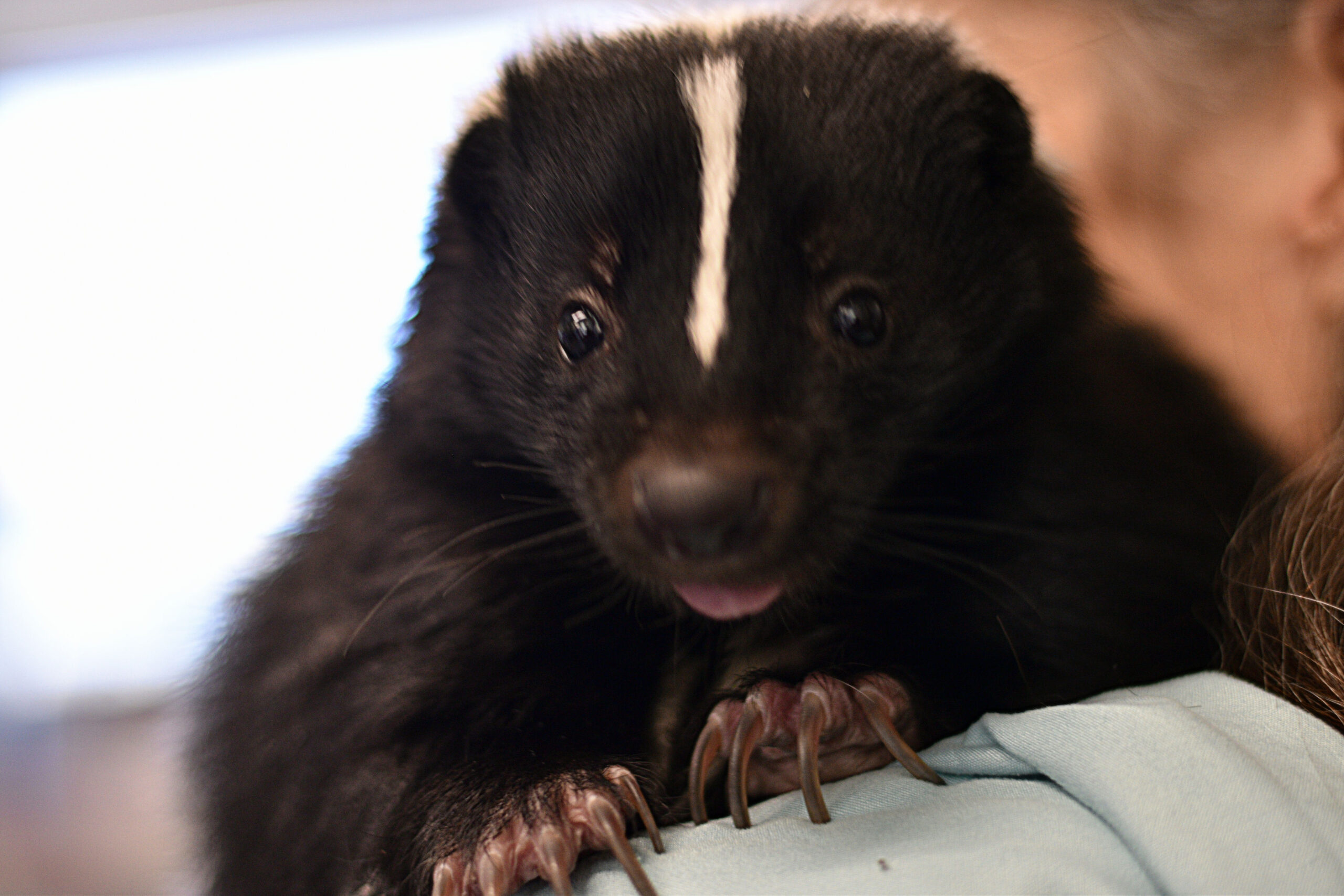 Ikkuma, the Red Fox, was attacked by a dog when she was just a kit.  Bitten on the muzzle, her upper jaw was fractured.  It was repaired, but her growth plate was damaged and her top jaw did not continue growing creating some physical limitations.  She is a sweet and playful fox and does well despite her disability. 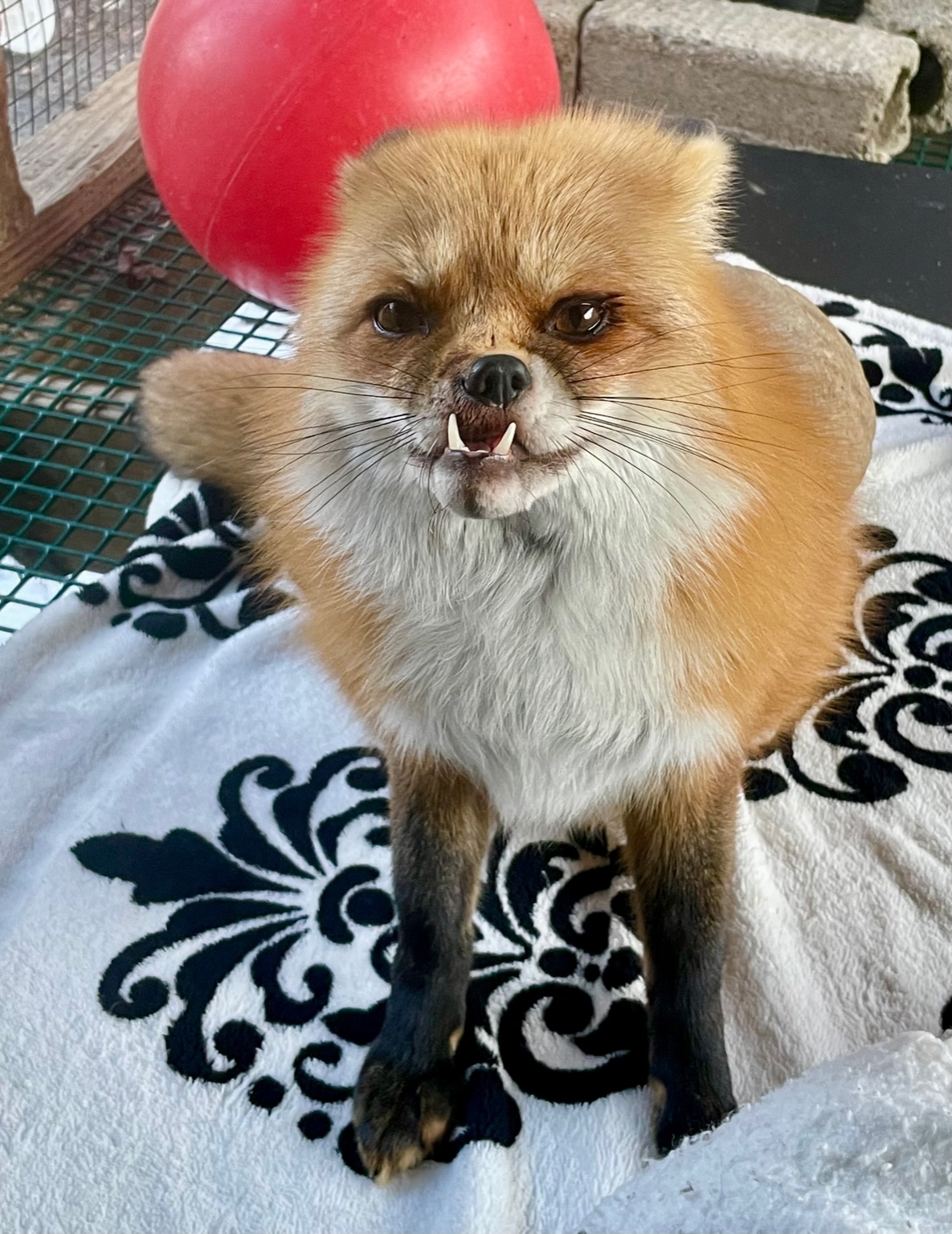 Logan, the Gray Fox, helps people learn that we have two completely different species of foxes in the Commonwealth.  Gray Foxes climb trees, and up is exactly where you will find Logan in his enclosure!  Grays live in the forest where they catch squirrels and other woodland prey. 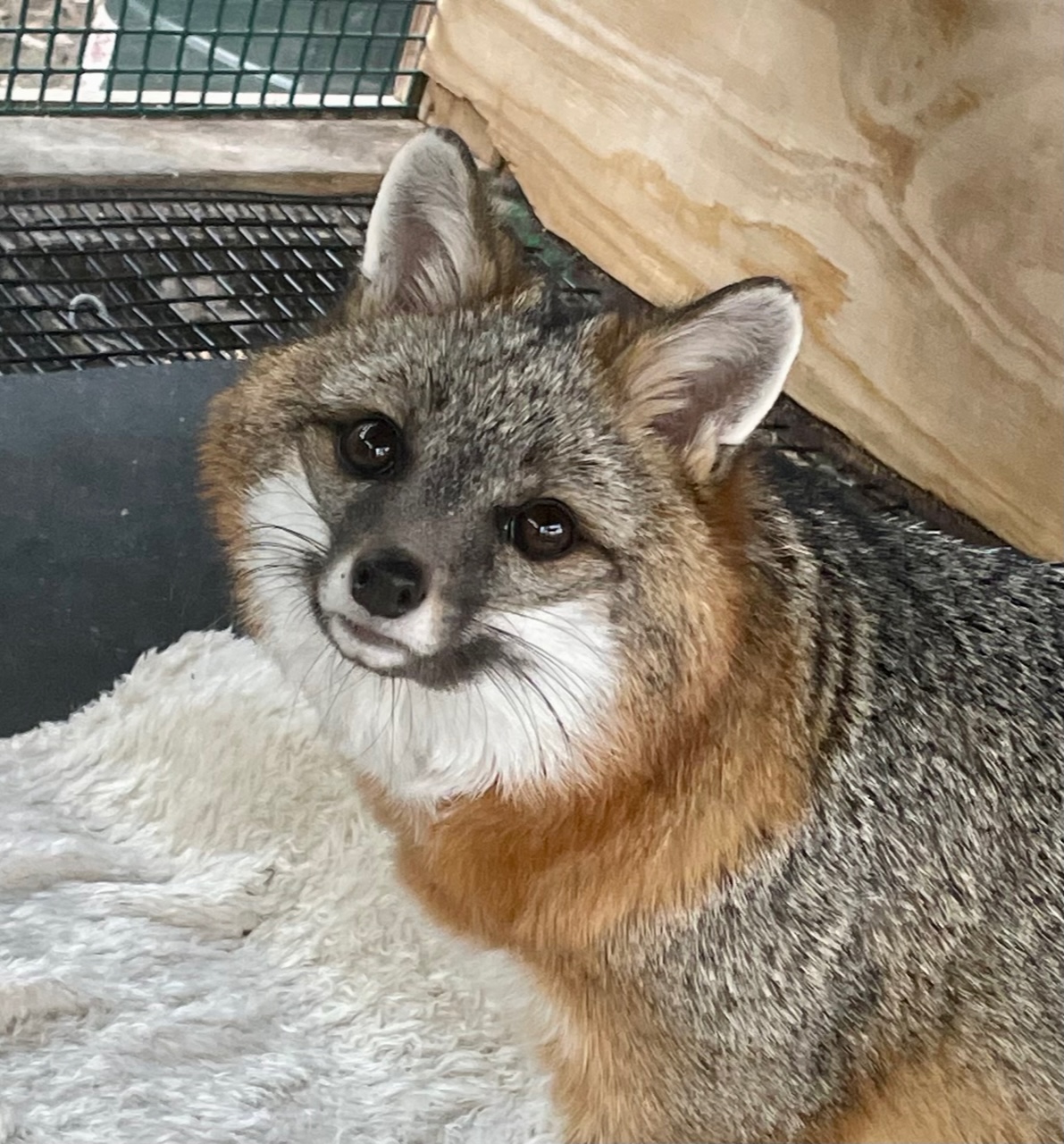 Blossom, the Virginia Opossum, was delivered to the Center having been raised for two months on a nutritionally deficient diet and handled by people.  Her bones were very weak and she required calcium injections and supplements.  She is healthy now and quite sweet.  The nation’s only marsupial, opossums are fascinating creatures and Blossom helps us share all the amazing adaptations that make them unique. 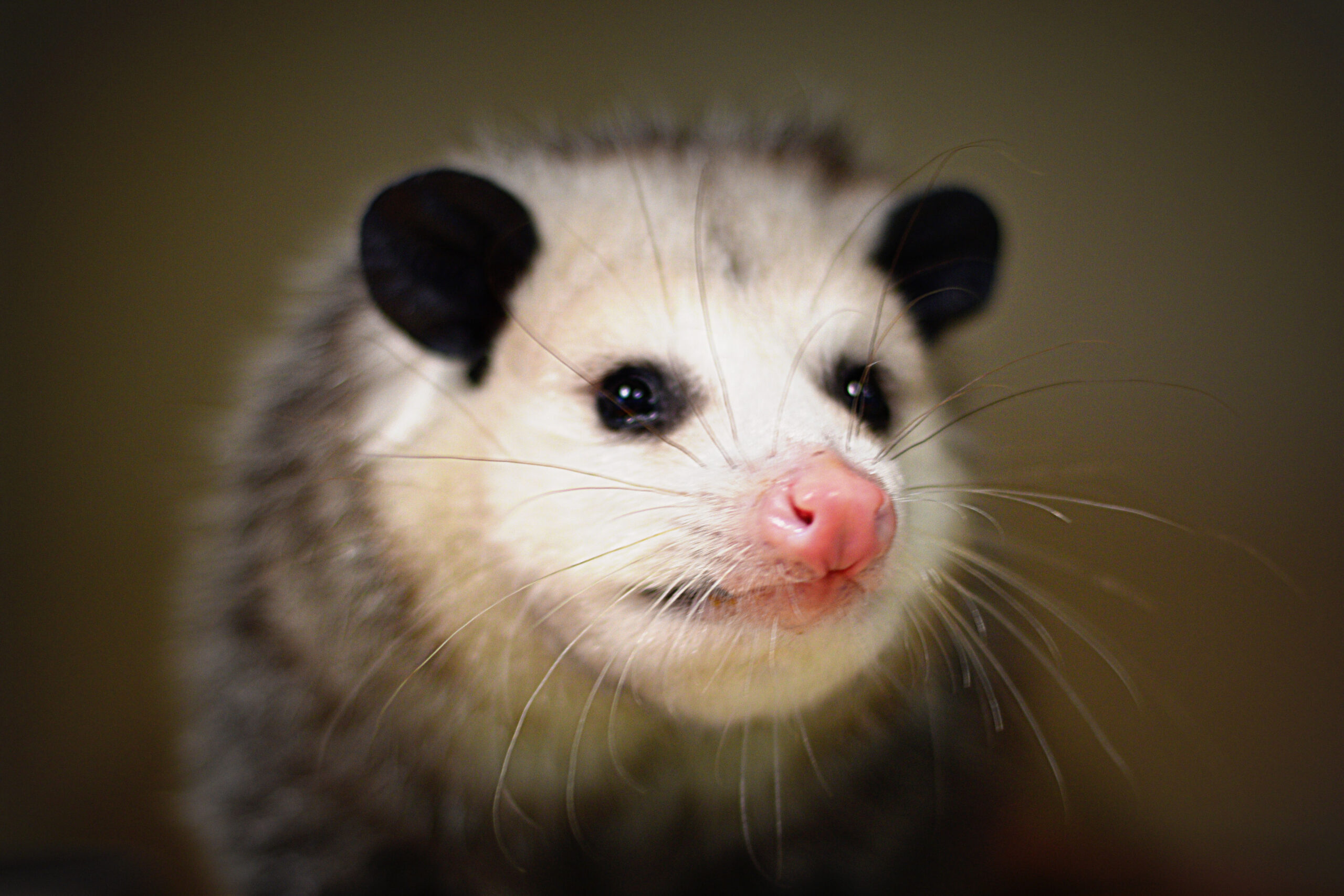 Flying Squirrels are the only aerial rodents. Although they cannot truly fly, they can glide long distances from tree to tree.  Active at night, they have enormous eyes so they can see well in the dark. Our permanent residents have all been stuck on glue traps damaging their tendons and ligaments.  These nocturnal creatures love acorns, seeds, fruits, nuts and occasionally some mealworms. 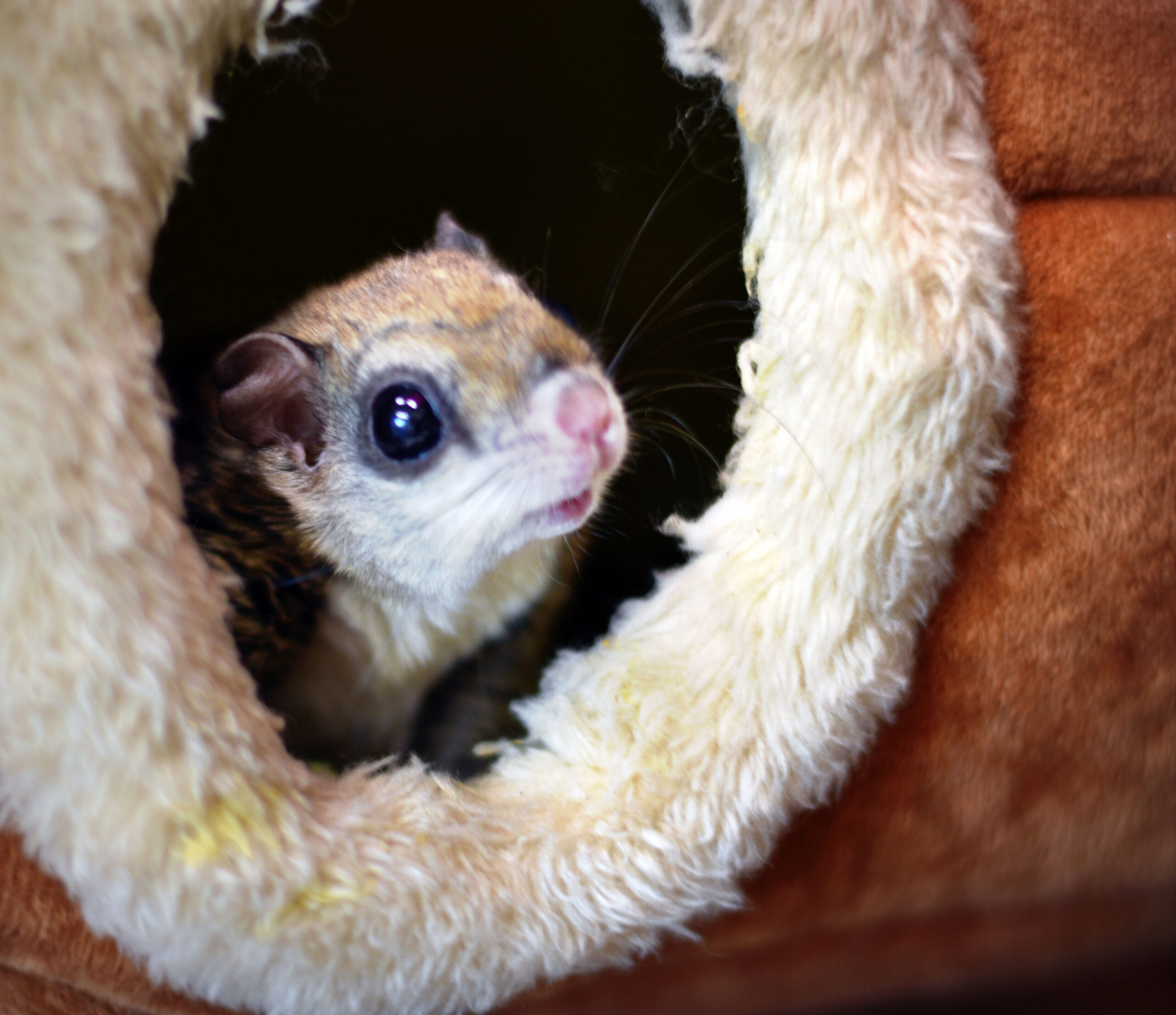 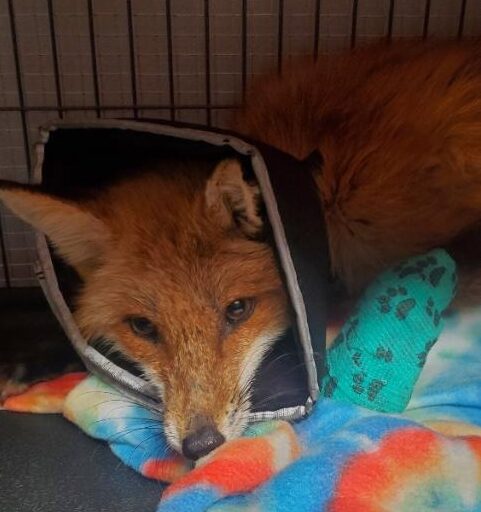